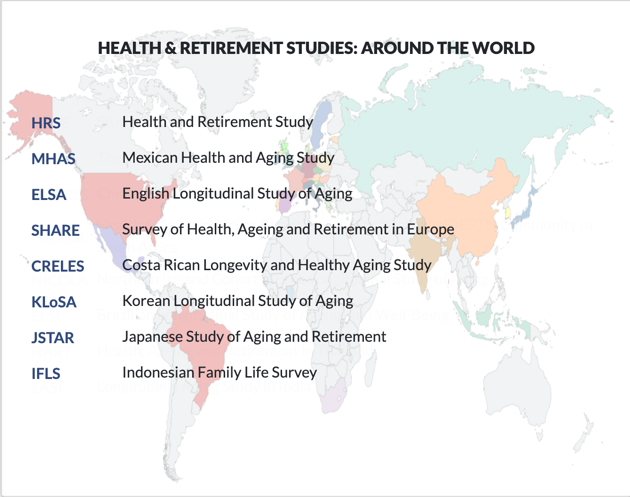 Tony: What is the Global Gateway to Aging all about?

Alden: Our NIA [National Institute on Aging] and other countries have funded aging studies around the world that are similar to the Health & Retirement Study (HRS) in the US. These are partner studies to the HRS. To access those data, you have to go to individual study websites and apply for permissions to use the data, which for academics is pretty easy. The Gateway makes it more convenient by telling you in one place where to find each study. Additionally, they create harmonizable variables you use to link across studies. Let’s take wealth/expenditures for instance; how you ask about these things is different across countries (e.g., housing and mortgages), but the Gateway figured out how to make it comparable for anybody who wants to conduct cross-national research. The Global Gateway to Aging’s goal is to create a platform where researchers can conduct cross-national research and use these data that has been collected by governments and supported by their taxpayers. We want researchers to use this data. The Gateway is one way to facilitate that goal.

Tony: Why would someone want to conduct cross-national research?

Alden: Let’s say you want to examine the effects of some exposure on an outcome. The association you find with your sample might vary by the prevalence, background protective and risk factors, and even government policies. If an outcome can be replicated cross-nationally, it lends additional credence to an association that may be causal across multiple settings and not due to a background variable responsible for the association.

Tony: What excites you about the Global Gateway to Aging? 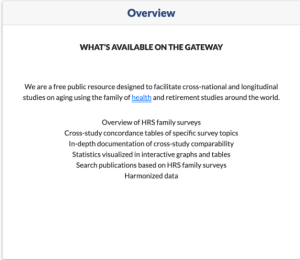 Alden: The quality of the data and detailed documentation. Do you need to know whether a word list was repeated in the same order or different order across trials, or whether words were presented verbally or visually? It’s documented. There are high-quality efforts that go in to collecting the data.

Tony: What Gateway studies in particular interest you?

Alden: Cognitive aging research. In the future, about 2/3’s of dementia cases will be in third-world countries, but only 10% of research dollars are spent outside of European countries and the US.  I work with the Gateway’s Harmonized Cognitive Assessment Protocols (HCAP).

Alden: Pretty well. I am part of a Multiple PI team focusing on harmonization of cognitive data in HCAPs as well as derivation of dementia— common ways of measuring dementia across several countries. We’re getting down into the really nitty-gritty stuff… item-level details. Here’s a great example from the Congo, although the Congo study isn’t part of HCAP: one of the most common cognitive tests out there is the Animal Fluency Test, and it only takes about 60 seconds to conduct; the test administrator asks the subject to name as many animals as the can, and it assesses language recall as well as executive function. Typically, a person produces about 30 to 40 words. But let’s say you grew up in a culture where kids aren’t familiar with a lot of animals, and they don’t have access to a zoo. They may not actually know of a lot of different types of animals. Instead, it may be more appropriate to ask them for the kinds of fruits they can name. If we asked about different fruits in the US, we’d get a highly-gendered result… we don’t want to measure sex, we want to measure language production. Identifying the correct set of common tests and making sure that the meaning of the variable is the same across these different contexts is tantamount to harmonizing research data.  The Gateway is producing in-depth documentation these data sets for cross-country comparability. Internally, the Gateway is having a mini-conference for HCAPs at the end of May where we are going to look at relationships and risk factors and outcomes among different countries endeavoring to find commonalities and data sets across different settings.

Tony: What else is on the horizon for the Gateway to Global Aging in which you are particularly involved?

Alden:  There’s lots of workshops all the time! Soon, the PI teams are going to plan out details in science and operations in next 5 years, and also organize user workshops annually for Gateway data.  In 2022 and 2024, we will focus on pollution data, and we will focus on HCAP data in 2023 and 2025—those are our big themes over the next 5 years.